In the fourth week of January 2021, the Recovery Support Function Leadership Group (RSFLG), a division of the Federal Emergency Management Agency (FEMA), reported that “although the COVID-19 [pandemic] has impacted the entire arts sector, nowhere has the effect been more direct, deep, and immediate than on the performing arts.” With millions of jobs lost and a completely devastating industry nationwide (see chart below), the creative landscape has been forced into a constant state of emergency-level thinking for performing arts organizations to survive in a period of upheaval. 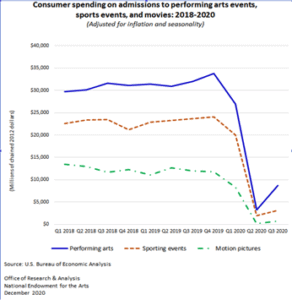 Since April, the Warren Miller Performing Arts Center (WMPAC) in Big Sky has risen to the challenge. Through a continued, active response to inventing and building new methods of access for both artists and audiences, WMPAC has continued to serve throughout what is sure to be one of, if not the most, challenging year for performing arts in the past century. Through high-quality virtual performances, innovative hybrid productions with both remote and local performers, facility enhancements, and out-of-the-box thinking, the theater has remained open, safe, and dynamically responsive to the pandemic.

Here are two examples from our innovative Winter Season. On a full moon weekend in December, WMPAC flipped the script and took its performance outside. Staged in the heart of Big Sky’s cross country ski trail system on the Big Sky Resort golf course’s driving range, patrons skied or snowshoed into a labyrinthine track custom-designed for this event by Lone Mountain Ranch. In the center of the track, award-winning concert pianist Hunter Noack performed on a 9’ Steinway grand piano, which was hauled out onto the course with LMR’s Snowcat Groomer, as he presented IN A LANDSCAPE: Classical Music in the WildTM to a sold-out audience. Each guest of the performance was given a custom set of high-quality wireless headphones that broadcasted the hour-long live performance as they explored Big Sky’s stunning landscape by ski, snowshoe, or foot. Though Noack has performed in over 72 outdoor locations, this was the first of his performances to take place on snow. 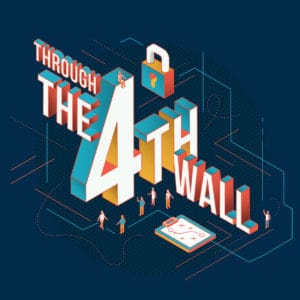 WMPAC upended the traditional notion of theater again with Through the Fourth Wall, an immersive game created for groups of four to eight people at a time. Each group has WMPAC to themselves as they solve life-size puzzles, stumble across interactive twists and surprises, and try to unlock the mysteries of the theater. The experience was designed by the creative team behind numerous escape rooms around the country, including the one at Big Sky Resort, and sold out its two-week run before opening night.

Who can say what live performances will look like in the coming months and years, but the Warren Miller Performing Arts Center will continue bringing innovative creativity to its audiences. WMPAC has broken down the barriers of traditional theater to make the performing arts safer and more accessible for audiences in all circumstances and is proud to set the stage for creativity in Big Sky, Montana.